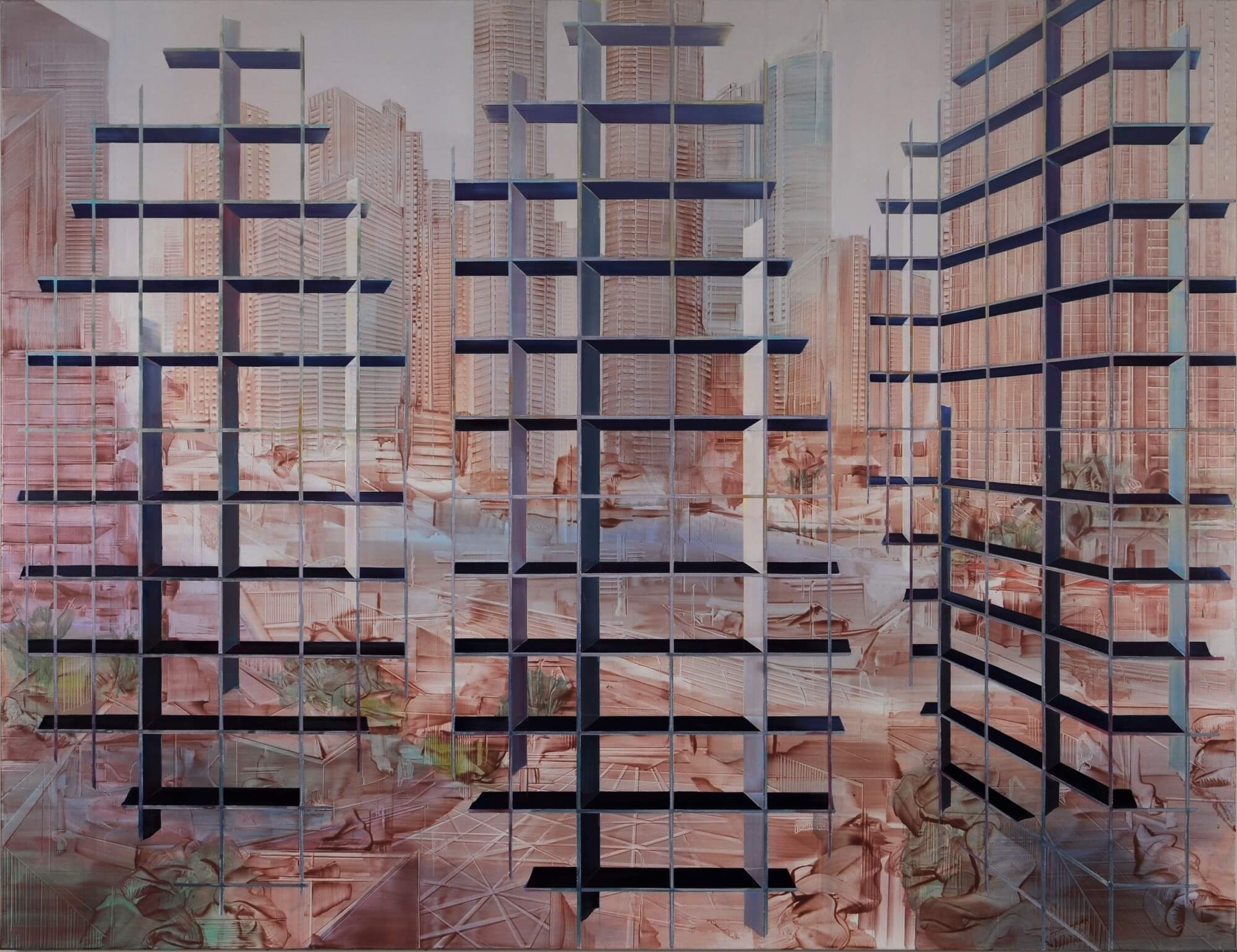 The second part of this impressive group exhibition – featuring Driss Ouadahi, Larissa Sansour, Yazan Khalili, Farhad Ahrarnia, Mohamed Ahmed Ibrahim, Nadia Kaabi-Linke and Mounir Fatmi – expands on the notion of the uncompleted project, the work in progress that may be a reworking of earlier strategies or a complete break with them. It presents a series of incomplete, evolving, paradoxical, overlapping paradigms where histories are re-evaluated, cultural artefacts re-examined, and multiple futures are explored. It’s a good idea for a curated show with several of Lawrie Shabibi’s top artists.

Farhad Ahrarnia’s images in On the Road, the Silk Road (2010-2011), where pen and paint are replaced with threaded embroidery, refer to an area that is historically a crossroad between empires. New links are being created both to its east and its west: Ahrania’s threading over the images of transporter trucks suggests a multiplicity of possible routes and outcomes.

Manger Square (2012), from the Larissa Sansour’s photographic series Nation Estate, accompany a film of the same title that proposes a much-reduced Palestinian state in the form of a skyscraper, each floor accommodating a Palestinian city or landscape. The female lead, played by Sansour herself, travels upwards in an elevator from one city to the other passing by iconic symbols and landmarks that suggest both history and displacement.

Sansour’s Archaeology in Absentia (2016) conveys a false sense of history, to be excavated by future generations: it is a bronze munition replica, opening to reveal a disc engraved with coordinates to a deposit of hand-painted folkloric porcelain plates buried in Palestine.

’Farhad Ahrarnia’s The Dig (2018), a silver-plated bronze shovel embossed with the Assyrian motif, has similar concerns. A ritualistic object that embodies the ghost of the specific artefact formed on its surface, it carries the potential to be buried and itself rediscovered in the future.

Apartheid Monochromes (2017) by Yazan Khalili is a set of painted canvases that highlight the perversion of mandatory state-issued ID cards and their bearing on the everyday lives of Palestinians. Introduced by Israel in 1949, the ID cards are classified into different colours that effectively determine the political, economic and social life of its holder.
Khalili’s Cracks Remind me of Roadkills (2014) is a set of photographs showing random cracks that resemble the triangular map of Palestine, juxtaposed with details of short stories; the cracks are a break of the flow of time, as a minor history breaking the mainstream narratives.

Mounir Fatmi’s Calligraphies of the Unknown (2019-2020) combine calligraphic shapes with other geometric figures inspired by the graphics that represent the fluctuations of the stock market. Fatmi deconstructs the abstract alphabet of the financial world, reflecting his belief that to understand the world, one must measure the pulse of both the financial markets and the flea markets. 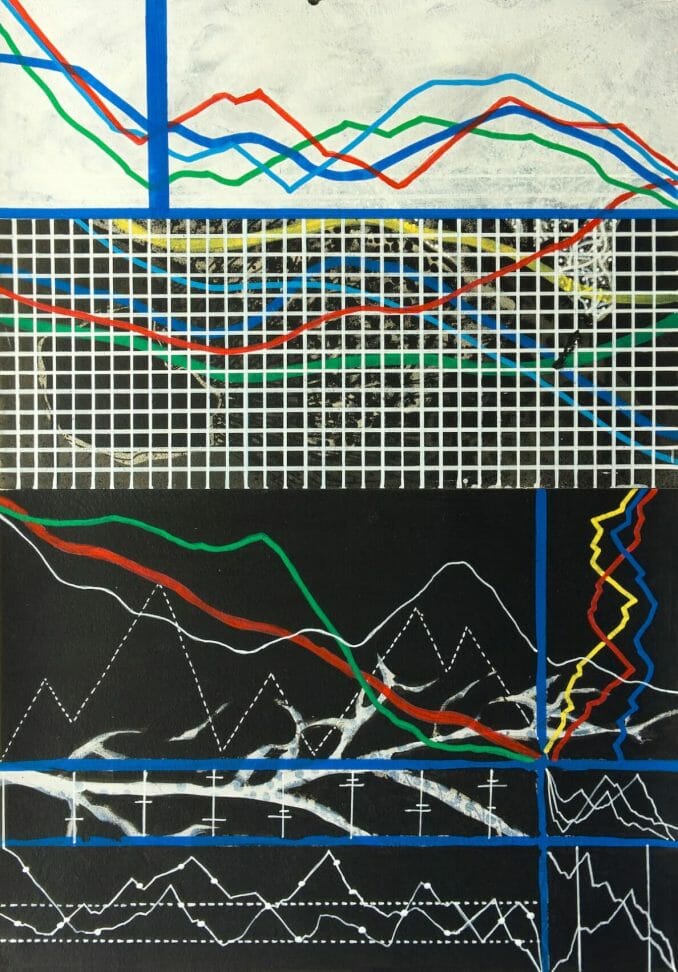 Scorched Earth (2018) by Nadia Kaabi-Linke, a floor sculpture made of water-cut stoneware slabs, traces the weed-filled cracks between cobblestones on the Neumarkt in Dresden. The cracks were the result of the intense heat generated by the firestorms following the British and American bombing raids in February 1945, killing 20,000 people. Today, far-right groups congregate weekly at this place in what could be seen as a symptom of an unprocessed past that still haunts modern Germany.

Finally, several works reference the landscapes and cityscapes of the UAE. Driss Ouadahi’s Inside Zenith (2014) was inspired following a visit to Dubai in the midst of the construction boom of the last decade. Certain structures from around the city are embedded within a fantasy landscape of super dense skyscrapers. Mohamed Ahmed Ibrahim’s Towers (2017), though industrial in outline, are made of delicate, recycled materials – papier maché, cardboard and dried leaves.